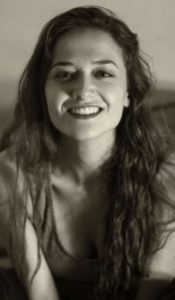 Julia Daye is an award-winning journalist, essayist, and producer. Her work has been published in the HuffPost, Taos News, Medium, The Startup, LiveTaos, The People’s Production House, HOWL, and the Hyam Plutzik Foundation literary journal, A Fistful of Words. She is the 2021 recipient of the New Mexico Broadcasters Association Excellence in Broadcasting Awards for Feature News and Continuing Coverage.

Julia Daye’s lyrical poetry is often admired for its ability to discuss grief, desire, and longing with electrifying craftsmanship and candor. Her distinctively symphonic translations of hidden harvests and existential patterns into word bring readers continuously home to fundamental truths, calling upon the human heart’s innate echo of the natural world. She is an alumna of the New York State Writers’ Institute and author of the online literary blog, Investigating Reality. Her first book of poems, The Edge of Waking, was published by A Freedom Books in 2017.

Julia Daye is the longstanding host and producer of KNCE Radio’s What Are These Things out of Taos, New Mexico. The show is known for its lively creative inquiry through in-depth interviews with artists and local change makers, as well as for bringing listeners weekly on-air poetry performances, and deep dives into music from all over the world.

A devoted community organizer, Julia Daye is a mainstay in the community arts scene in Northern New Mexico. She has been the host and organizer of three ongoing poetry reading series—most prominently, the locally celebrated People’s Mic Poetry Night. In 2017, she went on tour with Poets For Peace. In enduring, committed service to community and social justice, Julia Daye is also Northern New Mexico’s regional organizer for One Billion Rising, having first worked as an organizer in New York City to fight violence against women in 2011. Believing unequivocally in creative expression as an agent for positive change, Julia Daye has been a catalyst for community-focused art and conversation for nearly a decade.

A mainstay in the high energy community dance scene, Julia Daye made a name for herself moving dance floors across NYC before moving to the Southwest. Her rich fusions of global bass, house, and world music inspired her nickname “The Rhythm Ambassador” in her east coast home. Since 2012, she’s been delivering shaking soundscapes to dance floors in the US and Europe, sharing the stage with such greats as Govinda, Kaminanda, Narkatta, Apollo Poetry, and Desert Dwellers. Collaborators over the years have also included a host poets, drummers, dancers, and musicians. She has appeared at acclaimed festivals and events, including FIGMENT Festival, Sister Winds, StarTribe, Tribal Visions, Dance Lab, and Ecstatic Dance. The current founder and producer of numerous get-down-and-get-sweaty events and series, Julia Daye is an artist in constant rapture with the universal medicine of dance and rhythm, arriving at the decks with the mission to liberate and elevate through a global tonic of electrifying beats.

Julia’s drum and dance schooling in West Africa in 2009 instilled the tribal boom characteristic of her DJ sets. Since returning to the US, she has also brought in sounds from Latin America, Southeast Asia and the Balkans, continuing to collaborate with local drummers and musicians for an even bigger dance floor thunder.